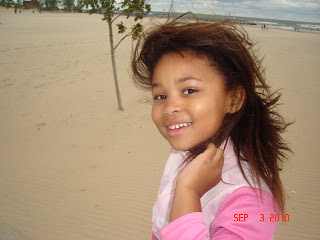 The finalists for PETA’s annual Cutest Vegetarian Kid competition have been announced, and my daughter Samara has been chosen to be one of them! She got through the previous rounds on her enthusiasm for vegetarianism and her dedication to living a veggie lifestyle and now all that decides a winner is the number for votes she can get, so as a very proud mom I’m here to ask all you lovely people to support her!

She is the only vegetarian kid in her school, and has put up with a lot of teasing and name-calling because of it, but despite that she has stayed true to her beliefs. She doesn’t know any other vegetarian children, and I supported her entering the contest so that she was aware that she wasn’t the only one, and that it’s OK to think the way she does. She really is a beautiful girl, inside and out, and it would mean the world to her if she won.

Please take just a minute to follow the link and vote for her. We have until the end of the week to get as many votes as possible, and it would be amazing for her if she won. Thank you!
Posted by Bev at 6:50 AM No comments:

Is there a factory farm near you? 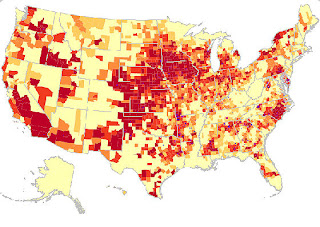 I came across this map yesterday, which quite shows all the factory 'farms' and meat processing plants  across America. You can zoom into your state and county and see exactly what is being farmed near your home, as well as statistics showing the rate of growth in animal production over the period between 1997 and 2007 (numbers gathered from census information). The brainchild of the Food and Water Watch, the site also gives some great information on how livestock farming impacts not only animal welfare, but our health, the environment and the community. Well worth a look. 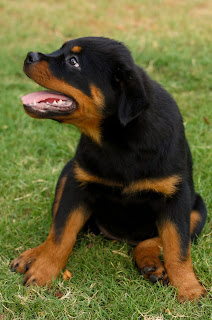 Just five months ago the good people of Missouri voted to reform legislation regarding puppy mills. The 'Puppy Mill Cruelty Prevention Act' ( PMCPA aka Prop B) was voted in to ensure that dogs who spend their entire lives in these large scale breeding facilities would receive basic, humane care. We're not talking velvet cushions or gilt cages here, we're talking adequate amounts of food and water, temperature control, shelter from the elements, regular veterinary checks, and female dogs getting a resting period between breeding cycles. Reasonable, compassionate legislation wouldn't you think? Apparently not according to the Missouri House of Representatives, who this week voted to scrap the act and are therefore going against the will of the general public of their state.
It pisses me off so much, that something that took literally decades of lobbying by animal welfare groups, was voted in by the people, and that hasn't even come into effect yet, has been kicked to the curb. The fate of these poor dogs, now lies in the hands of ONE man - Governor Jay Nixon. This is where the voters of Missouri can do their bit once more.
If you live in Missouri, please contact Governor Nixon, and very nicely ask him to veto SB113. If you don't live in Missouri, but know someone who does, please tell them what's going on and ask them if they would help. And if you don't think the live of a puppy mill dog is a bad one, then check out some of the investigations that the ASPCA has carried out and we'll see if you change your mind.
Posted by Bev at 12:00 PM No comments:

Put down that bacon and celebrate National Pig Day!

Happy 1st of March! Today is also National Pig Day, a day when (since 1972) we are to "to accord the pig its rightful, though generally unrecognized, place as one of man's most intellectual and domesticated animals." Thank you Wikipedia!
I'm not sure how enthusiastic our porky friends would be to find their national day is celebrated by them being eaten. Pigs are intelligent creatures, they love to play, can recognize their own name and live complex social lives when left to their own devices. Sadly, a lot of people only have one thought on a day like today, how good a bacon sandwich tastes.
Let's see how a pig celebrates his freedom. This video from the Gentle Barn (go check out their work, they are truly amazing!) shows a piglet named Biscuit who was used at a pumpkin patch. When pumpkin season was over he was headed for the slaughterhouse but luckily was rescued and taken to the sanctuary instead.
Posted by Bev at 11:12 AM 1 comment:

Earlier this week, Mercy for Animals released the following video highlighting the atrocities carried out to animals in the mass production of food. Only 12 minutes long, the video is hard hitting but if you eat any animal products you should be watching it to find out what happens to food stock animals before they show up on your plate.
The lovely Lindsay Wolf of Kiss Me, I'm Vegan has launched the Farm to Fridge Project to ensure the video gets to as wide an audience as possible. Here's what she has to say.

"What is the Farm to Fridge Project? Well, I'll be sharing "Farm to Fridge" on my facebook wall for seven days, and each day, I will remind everyone out there that if they choose to watch it and feel helpless afterward, I can help. This is my pledge, and it's the least I can do for these innocent, sensitive, and needlessly abused animals."

She is asking anyone who shares her compassion for the animals to follow in her footsteps and put the video on their own Facebook wall. Easy peasy no? And as Lindsay says, if one person changes their lifestyle then it will be well worth it.
Posted by Bev at 11:48 AM No comments:

Are you ready for some new Daiya? 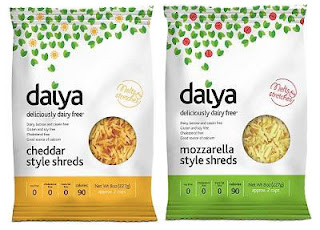 I heard a little rumor over the weekend that Daiya was to introduce a new Pepper jack flavor to their line of vegan 'cheese' awesomeness, so I emailed them to find out if this was true! The lovely Shnane Liem mailed me back and said...

"The rumors are true! We are excited to announce that we will be adding a Pepperjack flavor to the Daiya line, which will available in mid-March."

You know how free range is a little more expensive than normal meat? Do you pay that extra few dollars thinking it means an easier life for the animal? Time to think again maybe. Hillside Animal Sanctuary in the UK, gave Sky News undercover footage of their investigation into Hall Farm in Norfolk, a duck rearing business that supplies upmarket Waitrose stores. The video below shows workers picking the ducks up by the neck and swinging them back into the flock. The animals are genetically geared toward heavy birds, so the consumer gets more bang for their buck but this means they cannot fly, so being thrown is going to cause them massive injuries.
The video also shows sick and dead and birds with the main flock, as well as birds that had been removed from the others but not properly disposed of. Yummy.
If you want to make sure that an animal on your plate doesn't suffer, don't assume that these big companies care about your conscience. They just want your money. The only way to stop animal suffering is to stop eating meat. End of story.
WARNING: The video shows images of animal abuse and may cause you to become vegan.

Bev
I love to look good, feel good and eat great but I don't want to do it at the expense of any animal. Many people think that giving up animal products is difficult to do - I'm here to show you that it's not, and where to go to find the things you need to live a cruelty free life style.